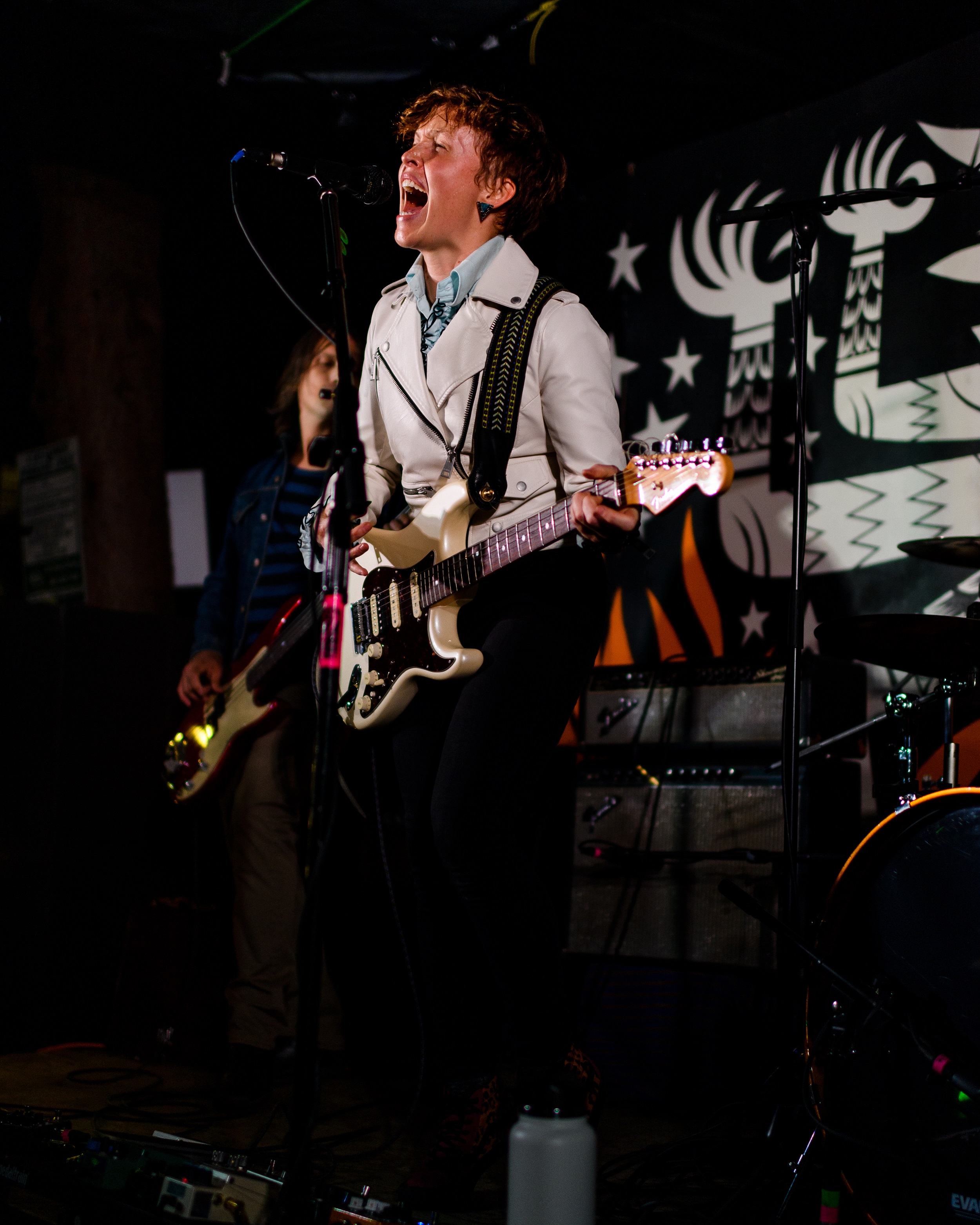 What was once thought to be a bustling thriving organism, strong and bulletproof, seamlessly self orchestrating and adapting to the growing needs and wants of its society, on a regular day in its golden hour revealed it is too, ‘human’. When the pandemic hit earlier this year, many found they were ill equip to cope with the fall out. One of Covid-19’s victims was the music industry. With her Achilles heel exposed, we the taverns and bar keeps, professionals of the music industry, and concert goers, saw our beloved home quiver in it’s raw vulnerability. We saw as the masses flocked to their computers, shut away in their homes, as online streaming soared and festivals grew dark, just how important community is. As months pass in quarantine, like sheets of paper falling from the calendar, the question for many music lovers echos louder, “When will we be able to have live music again?”  Though many innovators have attempted to recover the essence of concert going, there is nothing to date that can replace the physics of being present with music and those that channel it. Just as atrophy had began to eat away what was left within us, a beam of light shone through the gapping hole that Covid- 19 has hallowed.

It was Gabby Holt and her band “The Vitals”, that made the announcement earlier that week. That they would be preforming live with local twist jazz rockers, “Bitches of the Sun”. There would be no digital streaming during the performance, it would be real.

With strong emotion and excitement swirling within myself like hot sand, I couldn’t help to think, “But how could that work?” I was sure that I couldn’t be the only skeptic. Rock shows are by definition not exactly socially distanced. They are classic for movement, heavy breath, and embrace. The embrace that you and what was once a stranger are experiencing a distinct feeling that seldom can truly describe.

Overdosed on CDC information, political agenda, and “new normal” edict, I found my feet piloting from memory the steps to be in the golden presence of live music.

The show, which also acted as a benefit show for the families displaced by the Echo Mountain Complex wildfires, was sold out prior to entry. With checks still in the mail, the current count for funds raised are at 800 dollars- with all proceeds going to those families. Tickets were available for 50 people for the venues patio seating which accommodated space for 75. Allowing plenty of space for social distancing. The Kenton Club, which opened for Multnomah County’s phase 1 earlier this September, welcomed back its community with a tasteful twist. Scattered through out the patio, 6 feet apart, were tables and chairs in a halo of white paint measuring their distance. What could not be measure, however, was the overwhelming shared energy as friends and fans began to take their tables. With eyes glowing behind face masks, it was obvious to all of us, even before the first note from the performers that the show was a total success.

As the peaceful and sleepy sun stretched its final orange warmth in congratulations for the efforts of the day, and as the cheerful crowd respectfully engaged with each other and their environment “Bitches of the Sun” began playing. In hypnotic silence music filled the Kenton Club. The tips of heads and noses could be seen peering over the fence, just to get a glimpse closer into the forgotten. With humor and ease, singer and guitarist, Joshua Davis, comforted us and allowed our atrophied muscles to heal. There was a notion forming through all of us, it was painted in all the goose bumps standing on all of our arms and the fact forming in all of our hearts. There is nothing that will make us forget.

After finishing their set, as Gabby Holt and her band began to set the stage for their performance, the air in the patio was liberated. Like a memory or a dream that we all knew and longed to know again, the air felt released. Released of tension, released of longing, and filled by a deeply rooted need. As we sat together in our halos of social separation, we were everything but, we were together again conjoined by a language that all speak. Music.

With unapologetic ease and the skill that only a true professional may wear, Gabby Holt and her band took to the stage. She spoke a few words of gratitude and thanked us all for joining her, and then like an olive branch bearing dove soaring above foreboding seas, she began spell casting. Every note immaculate, familiar yet imaginative, every song leading us into the next like a well crafted poem. Showing us all by example, that we can and will carry on. With eloquence and diplomacy, she leapt, pouncing on depression and the darkness that Covid has left many of us. Coaxing out fear and anxiety, and then, shredding it to pieces. The sun shone in the dead of night. As the lights from the stage glimmered into the rabble, people were dancing at their tables, completely soaked, completely remembering, and I was whole again.

Covid-19 has jackhammered it’s way through our communities on a global scale. Ravishing the lives and wellbeing of every person within the music world. When it was clearly the considerable decision, to aid the other facets of our system in need. The music industry was left vacated.

Like the empty halls of a home once loved still operating out of the memory of the family that once lived in it, ever waiting their return. Without it’s people, what is it? After all, it was, we the taverns and bar keeps, professionals of the music industry, and concert goers, that saw our beloved home quiver with the coldness Covid too left it. Even so, there is an unshakable blood that music simply possesses. Perhaps for a fleeting moment in time, the music industry may take a hit. Historically, she has, and historically her bounce back has left us with new inventions we swear we simply can not do without. Music has shown us, that when you stop something she will always find another way. Such as, the 1920’s during the “Great Depression”, when unemployment was at a startling high for the times. As a result of this, discs for gramophones became obsolete. However, true to her adaptive nature, 6 months later the very first commercial vinyl rose from the ashes and became the next innovation for the music world, bringing hope and new life. Those that inspire you to rise up, the individuals that light the way, and those that spark the intrinsic belief to carry on. These individuals, are the beams of light through the caverns of this newly formed “normal”. Our beloved organism, our strong and bulletproof home, unstoppably adapting. She, will never die and the people like Gabby Holt, will have us, never forget.

Below are some photos of the event. 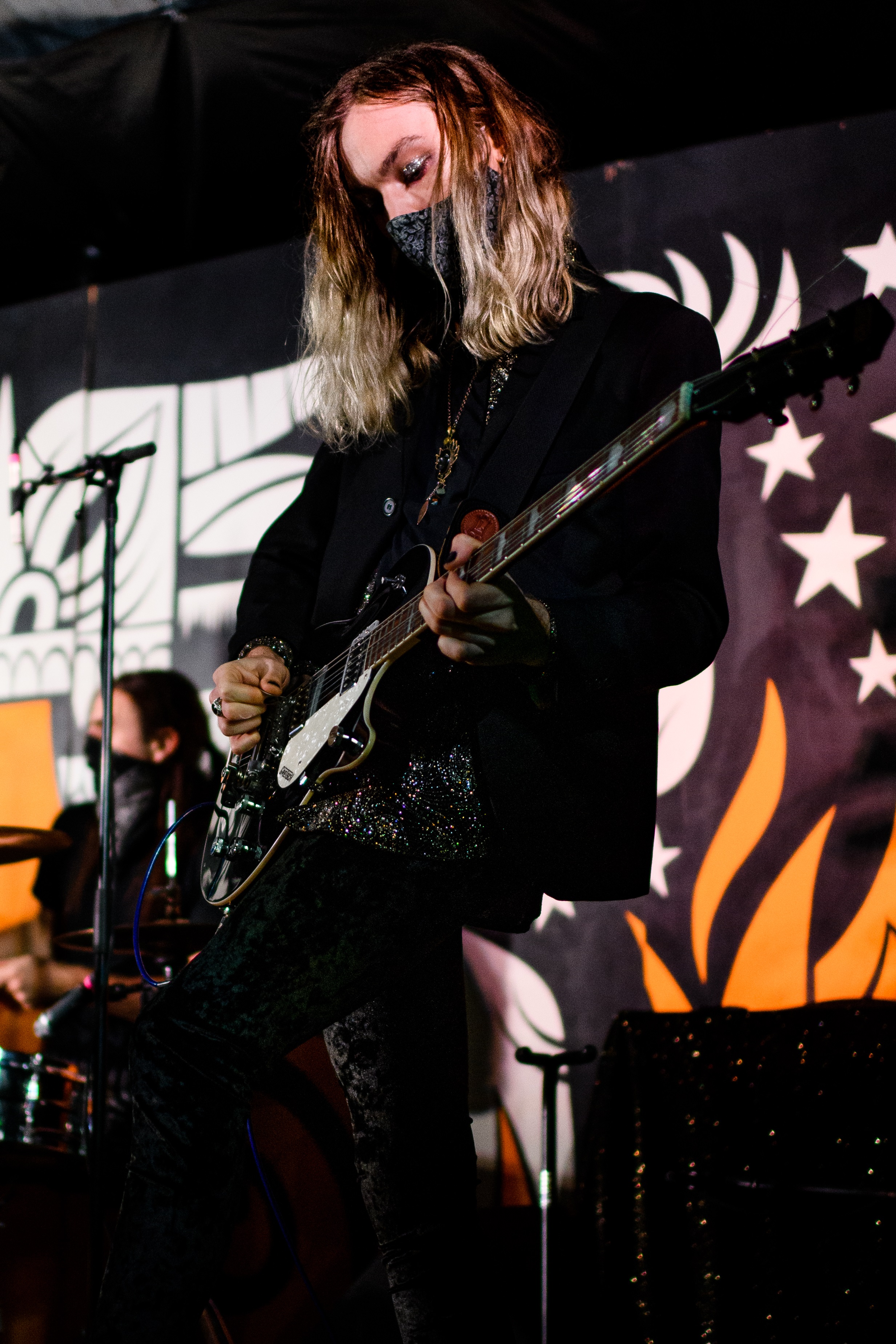 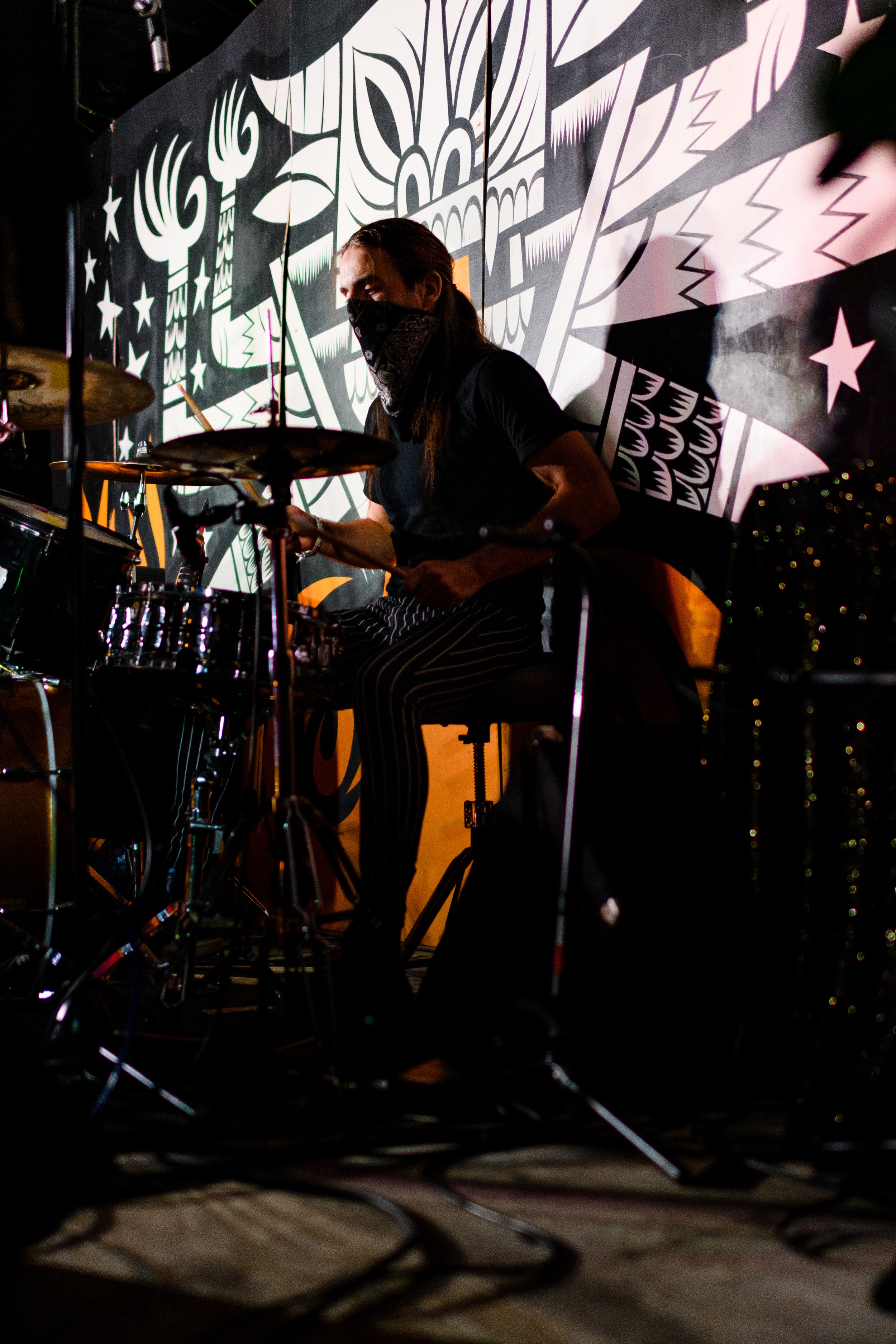 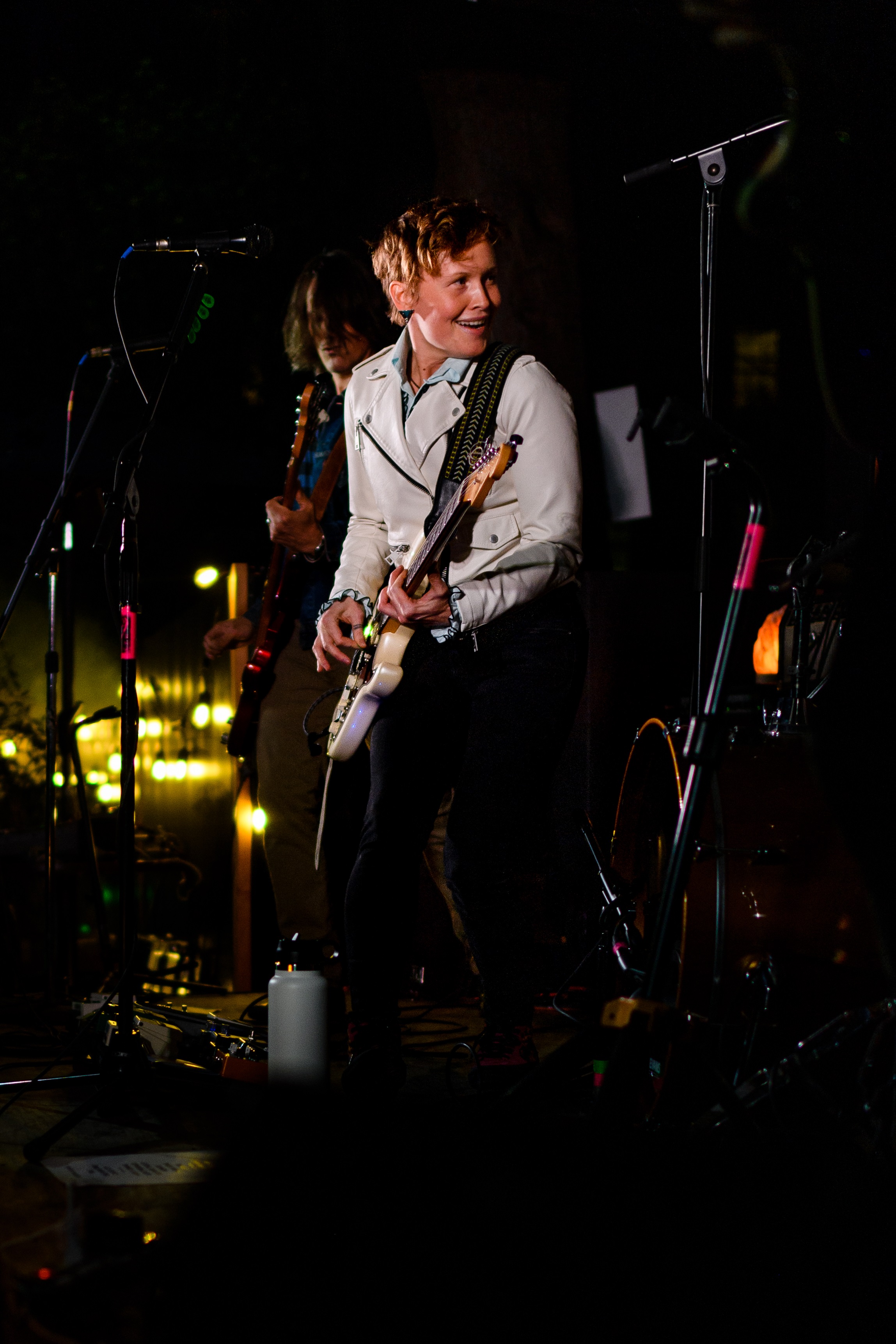 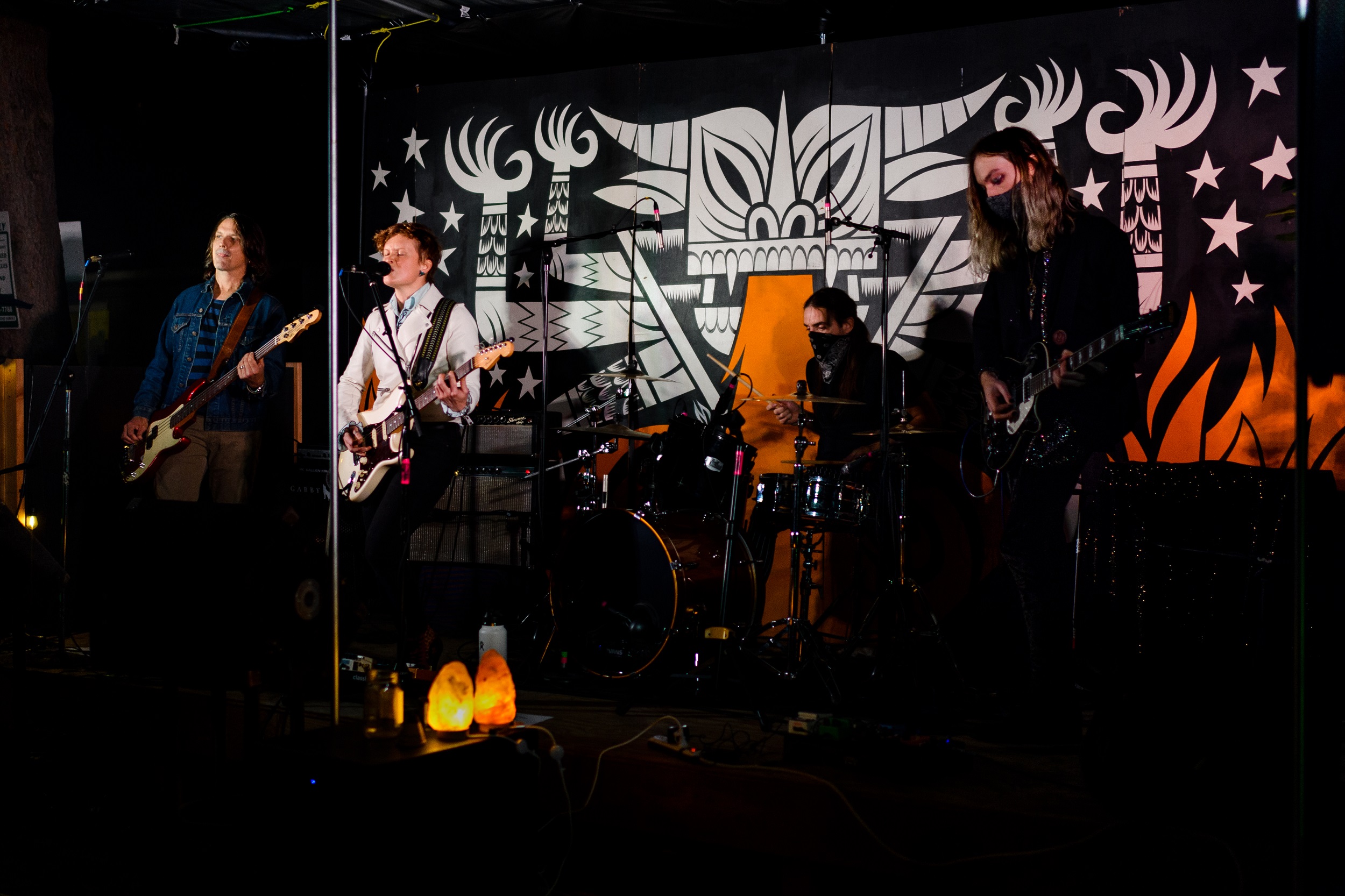 Gabby Holt and the Vitals  (Photo by Roderick Allen) 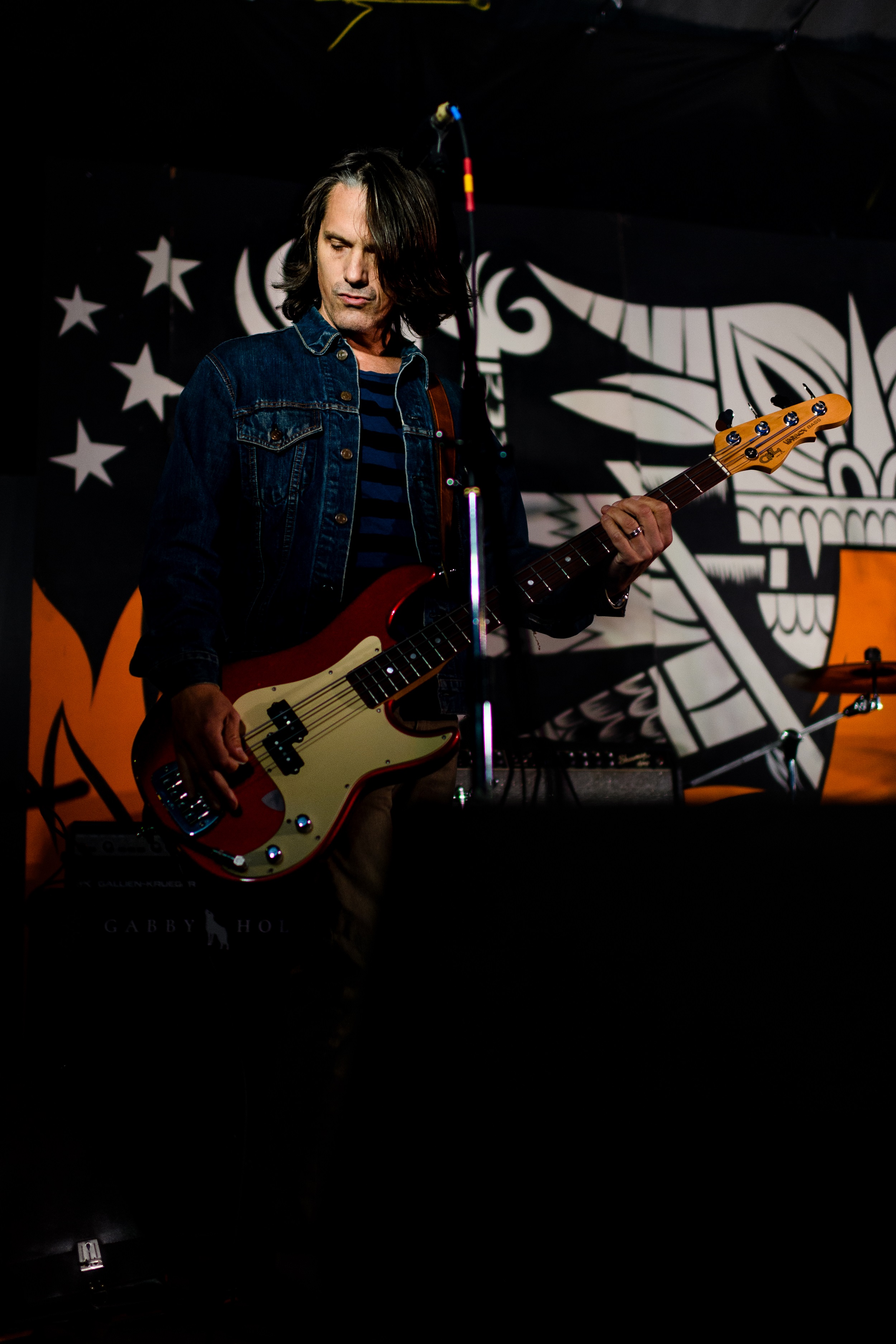 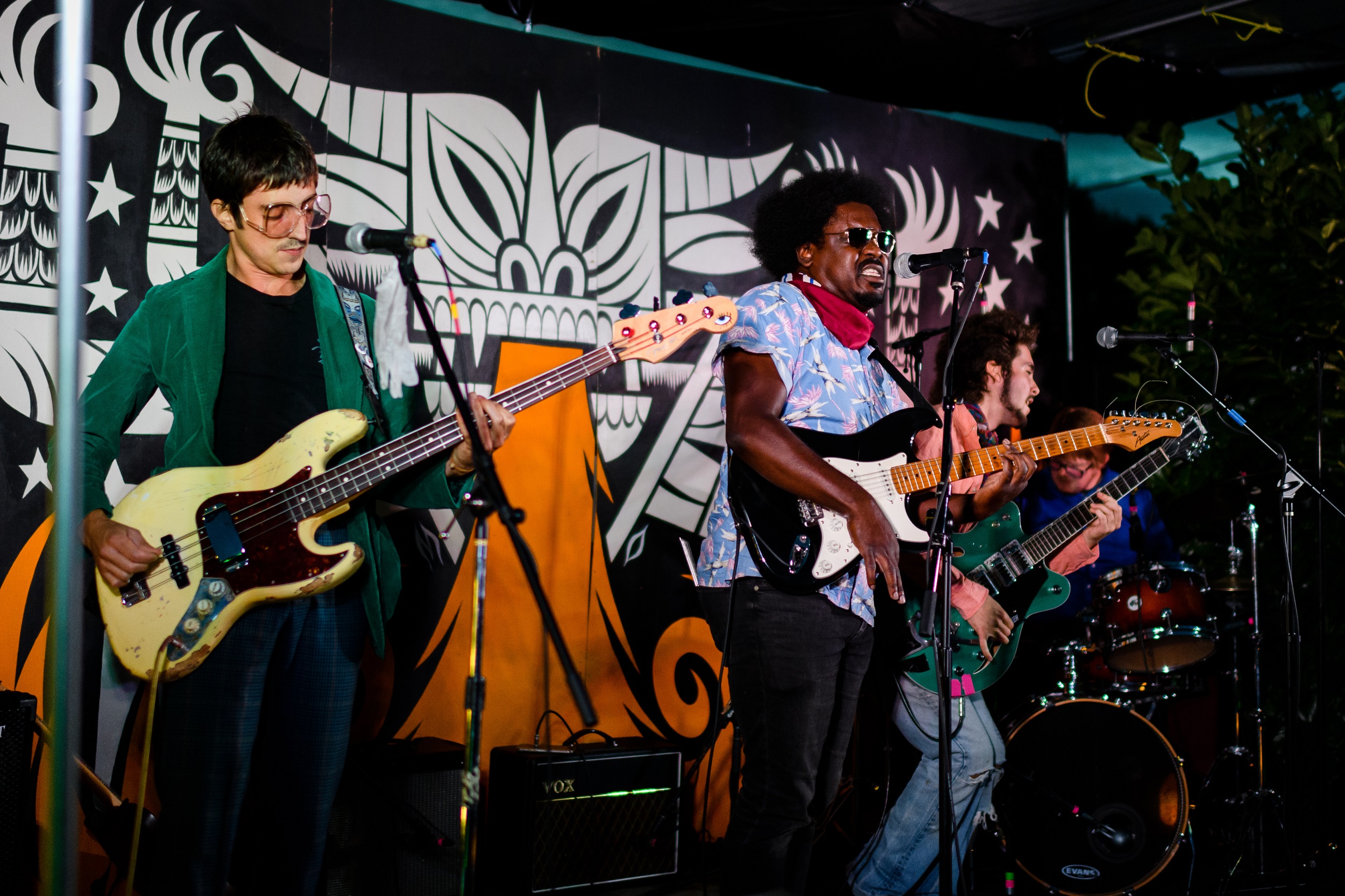 Bitches of the Sun (Photo by Roderick Allen)